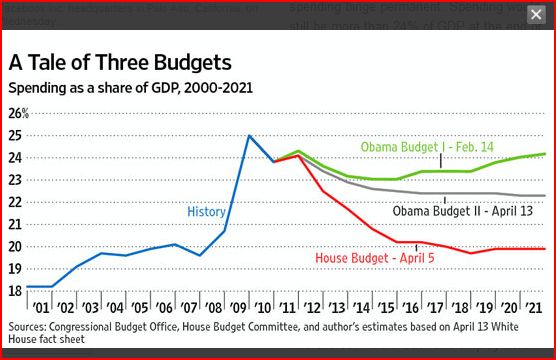 I understand–or am coming to understand–that when writing for a non-specialist audience, a certain amount of simplification is necessary: I’m guessing that the Journal has never actually published the regression results backing up the op-eds published in its pages.  I get it.  Really, I do.

But Taylor’s simplifications go so far as to be misleading.

First, he laments the fact that the budget increased from 18.2% of GDP in 2000 to 19.6% of GDP in 2007, and has since risen to about 24.4% of GDP.  The implication of this statement is that while Taylor’s boss, George W. Bush, was president (Taylor was  Under Secretary of the Treasury for International Affairs during the Bush Administration), spending was under control.  This implication omits several inconvenient facts.

According to Taylor: “A simple chart, like the one nearby, would greatly clarify the debate.”  He later writes: “ 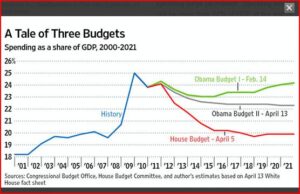 When I show people this chart they ask why Washington is even having the debate.”

Probably because the chart glosses over several important issues. The House Republican budget, as the Economist notes, uses excessively optimistic forecasts.  Additionally, the Republican budget proposal shifts some of the costs of Medicaid onto the states, by replacing the current system with a set of block grants that will reduce federal spending.  This may or may not be a good idea, but the net effect is merely to reduce federal spending at the expense of the states.

To simplify: reducing the federal budget deficit by an amount and increasing the aggregate of all state budget deficits by the same amount does not demonstrate fiscal rectitude.

To claim, as Taylor does that, “…the House budget plan, with spending in the same range, approximately balances the budget with no increase in taxes…” is misleading.  John Taylor should know better.