In a bitter editorial, The Irish Times laments the country’s financial difficulties in historical terms.

Was it for this?

IT MAY seem strange to some that The Irish Times would ask whether this is what the men of 1916 died for: a bailout from the German chancellor with a few shillings of sympathy from the British chancellor on the side. There is the shame of it all. Having obtained our political independence from Britain to be the masters of our own affairs, we have now surrendered our sovereignty to the European Commission, the European Central Bank, and the International Monetary Fund…

The true ignominy of our current situation is not that our sovereignty has been taken away from us, it is that we ourselves have squandered it. Let us not seek to assuage our sense of shame in the comforting illusion that powerful nations in Europe are conspiring to become our masters. We are, after all, no great prize for any would-be overlord now. No rational European would willingly take on the task of cleaning up the mess we have made. It is the incompetence of the governments we ourselves elected that has so deeply compromised our capacity to make our own decisions.

The problem, of course, is that the Irish government’s bailout its banks rescued the banks—at least temporarily—but left the government in need of a bailout.  The government has claimed during the last few days that it does not need a bailout: it has enough cash to forestall a trip to the debt markets until next year.  Good thing, too, since the spread on Irish bond yields (vis-à-vis German yields) have spiked to near-Greek levels in recent days. 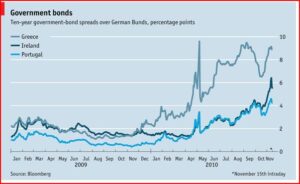 The Governor of the Central Bank of Ireland, Patrick Honohan, has been more forthcoming.  Rather than taking the government’s line—an awkward line, considering that the delegation in Dublin is negotiating bailout details—he said that “he expected Dublin to receive tens of billions of euros in loans from European partners and the IMF to provide contingency capital for its shattered banks.”

Historically, governments have been careful about providing money in bailouts.  During some of the earliest bank bailouts on record, those of the Bank of New South Wales in 1826, the Banque de Belgique in 1838, and the Schaaffhaisen Bank of Cologne in 1848, governments typically did not offer up any money until they had satisfied themselves that repayment was likely and that the ultimate cost to the Treasury would be low.  This is not an argument against a bailout, but suggests the cost borne by debt and equity holders under the bailout plan left taxpayers holding a greater burden than was warranted.